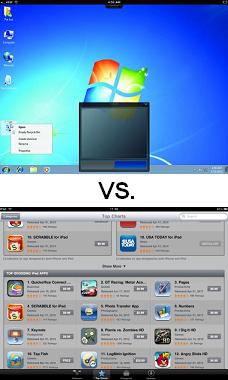 Pop quiz: Why did you buy your particular smartphone or tablet?

A. Because of its cool apps that let me make dinner reservations, hail a taxi to the restaurant and then watch ESPN while I’m in said taxi.

B. Because of its remote-desktop capabilities.

Chances are, you just answered A (or some variation of it). People buy mobile devices for the apps. Sure, they use their remote-desktop features, but only because it’s easier to carry an iPad all day than it is to lug around a laptop. (And because you look a lot cooler if you have an iPad.)

Everything being equal, people would rather run Windows applications natively than log into a remote-desktop app, spend five minutes figuring out how to double-click on an icon and then hope the WiFi doesn’t cut out.

Pop quiz part 2: What does this have to do with the virtualization market?

B. More than you’d think. Read on…

VMware and other remote-desktop middlemen keep trying to insert themselves into the mobile conversation with their clients for smartphones and tablets. This plays into VMware’s prediction of the death of the traditional operating system. The idea is that VMware’s virtual infrastructure technologies and cloud-based applications, along with the proliferation of mobile devices, will break IT free from the chains of Windows, allowing users to be more independent and more productive. (It will also really, really complicate enterprise device management, but they usually leave that part out.)

The subtext is that the downfall of Windows will lead to the downfall of Microsoft, setting the stage for VMware to become the Microsoft of the 21st century. Of course, even if you agree with this premise, that’s all still a long ways off. And even if it does come to fruition, Windows is not the only bullet in Microsoft’s chamber. They still have the Xbox!

Just kidding. They still have the apps. Microsoft Word, Excel, PowerPoint, etc. drive a whole lot of business around the globe. The problem is, using them on smartphones and tablets isn’t exactly the easiest thing in the world these days.

Our sister site SearchEnterpriseDesktop.com reports that more IT shops are calling for tablet versions of Windows apps to address this issue. The story focuses mostly on developing apps for Windows 8, which, with its ARM processor support, will be designed to run on mobile devices as well as traditional desktops and laptops.

But to truly ensure its continued relevance among business users, Microsoft needs to decouple its applications from its OS altogether. Look at it this way: If you’re an existing iPad user who wants Office, you shouldn’t have to go out and buy a Windows tablet. (And you most likely wouldn’t, even if you had money coming out your ears, because really, who wants to carry two tablets around? Do you know anyone who has an iPod AND a Zune?) Not taking this approach will hurt Microsoft on two fronts: nobody buying its tablets, plus a decreased reliance on Office among mobile workers.

If you’re an existing iPad user who wants Office, you should be able to go into the App Store and buy it with just a few taps of the screen, just as you would with Angry Birds or Words with Friends. Same if you have an Android tablet or a Hewlett-Packard TouchPad or even a BlackBerry PlayBook, if you’re into that sort of thing.

With ubiquitous availability on mobile devices, Microsoft applications will remain dominant, even as we adopt “a new way to work,” and even if the traditional OS does die. And it will come with the added bonus of cutting out VMware and the other virtualization/remote-desktop middlemen that mobile users now rely on to access their Windows apps.

Colin Steele - 30 Jun 2011 8:17 AM
Thanks for your comment, but I don't think cloud-based application virtualization will do Microsoft any favors. Users would still have to rely on an Internet connection, and the applications wouldn't be designed to run natively on mobile devices, so you'd still have some of the usability problems that people have now with remote desktop applications.