“Virtualization alone does not a cloud make.”

Seems like a pretty innocuous statement, right? Not when it’s on a Microsoft billboard, and that billboard happens to be along a stretch of highway that VMware employees take to work.

The inference is that VMware, for all its cloud talk, is just a virtualization company at its core (and that Microsoft — with Office 365, Windows Azure and Hyper-V, as the billboard points out — has the full line of products needed to really build a cloud infrastructure.) 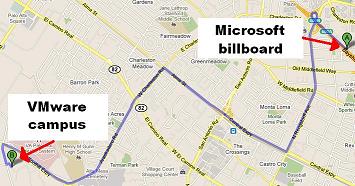 VMware has already launched a counter-attack in the blogosphere. Eric Gray, group manager for VMware’s Competitive Lab, posted a photo of the billboard and is soliciting comebacks from readers. His suggestion: “Yeah, I’d say the exact same thing if my virtualization was Hyper-V.” Hey now!

VMware has been trying to position itself as a cloud company for a few years now, and most IT people do associate VMware with cloud computing these days. But Microsoft is stealing the spotlight among the general public with its recent “to the cloud” TV ads.

One such ad shows a couple in a crowded airport. Their flight is delayed, so they access their home PC from their laptop — via the cloud, obvs — so they can watch the DVR’ed season premiere of a reality TV program.

What does that have to do with automated, scalable, on-demand data centers — you know, the kind of cloud computing that virtualization pros are looking at? Absolutely nothing, because “cloud computing” is an extremely broad term.

Sure, Microsoft has a leg up when it comes to winning mindshare about consumer cloud technologies. But organizations that want to build private clouds will likely rely on their existing virtual infrastructures, and VMware has a huge advantage there.