Virtualization made adding new resources easier than provisioning hardware and incurred minimal downtime, but there was often a disconnect between what the business wanted and what IT teams were able to deliver.

It wasn't uncommon to see vendors offering headline grabbing promises, like, "Deploy a VM in less than 20 minutes." Unfortunately, the reality often fell short of the promise. VM deployments were usually a long, drawn-out affair because of the all the steps needed to get approvals and allocate costs. Business leaders, seeing the vendors' promises were often unhappy with the result, creating a point of tension with the IT department.

The elastic compute model, better known as cloud computing, was born out of the need to provision VMs in very short timeframes to address these concerns. Amazon was one of the first on the scene and created a game changer with its elastic compute model. Under this model, businesses can pay only for the capacity and resources they use.

First, it allows businesses (not necessarily just IT) to provision predefined servers on demand in a streamlined, pre-approved fashion that meets the business's requirements. Second, when done properly, elastic computing can adjust resource allocation on demand, helping manage overall costs. 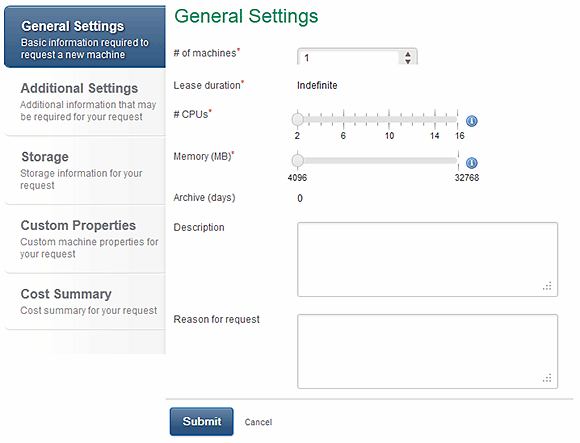 Users can create and deploy a VM with a simple wizard.

What makes VCAC even more interesting is that it is actually hypervisor agnostic and works with several other manufacturers' stacks, including Citrix. New versions of VCAC are coming fast with lots of improvements and new features.

So what makes VCAC so great? Put simply, it creates "clouds for business people." VCAC removes the disconnect between what the business wants and what IT can deliver. In essence, it allows the business to be involved in delivering the service, as well as managing the costs and hardware. 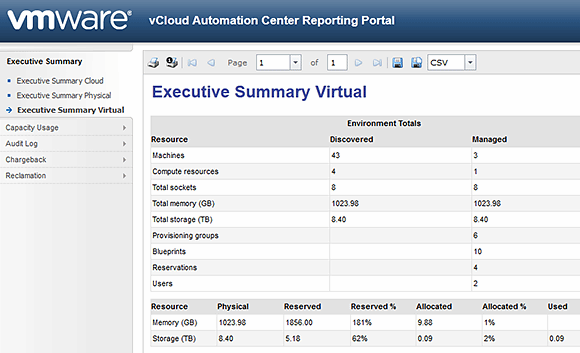 Business leaders can easily track and manage resource use.

VCAC also addresses the traditional problem of VM sprawl with a configurable workflow setup. The workflow allows business managers to approve each VM, because it creates an audit trail for each. Perhaps even more important, with the standalone nature of VCAC, each business can have its own administrators, servers, approval workflows and networks. Each business arm can have its own virtualized, ready-to-use elastic compute environment.

However, all this elasticity isn't free. A number of factors prevent widespread adoption, starting with the price. It is also a very complex product. To put it into context, it can take months to get it set up just right for a production environment.

Elastic computing is both a blessing and a curse for IT. Done properly, it gives IT the flexibility to respond to business needs. However, it is also the reason why some in-house IT will lose out to cloud providers, like Amazon, that have already perfected elastic, on-demand computing.

Big businesses are only just beginning to understand that IT needs to be more responsive and that waiting weeks to provision new servers just won't cut it. Cloud providers, like Amazon, can set up a working instance in just a few minutes. On the other hand, having in-house IT means the business has a dedicated resource that it can direct as needed.

Soon, businesses won't be asking whether they need elastic computing, but whether in-house IT can (or should) provide it. Before your business gets to that point, IT managers should consider deploying an elastic computing model, like VCAC, or risk seeing their budgets -- and their jobs -- sent to a public cloud provider.

Stuart Burns - 26 Feb 2014 6:20 AM
Are you worried about your organization turning to public cloud providers over in-house services?