Have you had a Microsoft Virtual Server 2005 security breach? The last article in this series explored virtual machine log file monitoring. This article will walk you through some steps to take before powering down a Virtual Server 2005 host for investigation.

First, export all of the event logs in case you don't have an archive of them. You could use the "VS2005_evtlogbackup.vbs" script from the previous article to backup the event logs. However, before you do that and clear the event logs, you may want to export the events in an easy to read format categorized by event type. This is where the "VS2005_evtcollect.vbs" script comes in. This script will extract the events from a list of computers and output them in five separate html files, based on the event type. The script for this section is available for download here.

Then, open up the Virtual Server 2005 Administration page if you can and take a screen capture of the main page so you can view the recent events later. After these two steps have been taken, I would recommend gathering some additional information before shutting down any virtual machines that are running on the host or the host machine, itself.

This additional information can be gathered by using tools from Windows Sysinternals. The list of tools includes "accessenum.exe," "autoruns.exe(or autorunsc.exe)", "pendmoves.exe," and "logonsessions.exe." Accessenum.exe is a graphical tool that allows you to view who has access to items within a directory or registry key. When you download it from Windows Sysinternals, just run the executable and choose a directory or registry key to query. An example of both a directory listing and a registry key listing are in the figures below.

Autoruns.exe is a graphical tool that is used to display information about bootup and logon processes, as well as what order Widows processes them. An example of its output is shown in the figure below. 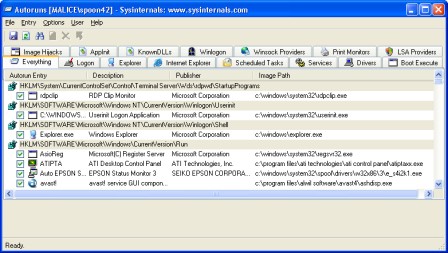 Autorunsc.exe is the command-line equivalent to autoruns.exe. It is useful for scripting and exporting the results to a comma-separated value (csv) file. It might be a good idea to run accessenum.exe and auroruns.exe when you first set up the Virtual Server 2005 Host machine and save the results in a safe place. Both of these utilities have a compare feature under the file menu that can be used to compare an original query file with current results. This might make it easier to locate differences or abnormalities.

Pendmoves.exe is a command-line utility used to view scheduled file renames and deletions for the next system boot. To run, simply type pendmoves in the directory where the utility is. An example of the output is seen in the figure below.

You never know what surprises a compromised system may have for you when you reboot. Pendmoves.exe may shed some light on any of these surprises.

Finally, logonsessions.exe is a command-line utility that will list active logon sessions. To run, simply type logonsessions in the directory where the utility is. Also if you use the –p switch then the utility will list the active processes under each session. An example of the output is listed in the figure below.

Autorunsc.exe, pendmoves.exe and logonsessions.exe are all command-line utilities. This means they are perfect for a script. This next script is nothing fancy. It is just a batch file called "incident_collect.bat."

To run it, simply put incident_collect.bat, autorunsc.exe, pendmoves.exe, and logonsessions.exe in the same folder. Then, run incident_collect.bat. This batch file will produce three files. They are autoruns.csv, logonsessions.txt, and pendmoves.txt. They are named for their respective tools. These files are simply the output of their respective commands. The batch file is listed below.

While complete forensic analysis is beyond the scope of this article, what you are looking for, in general, is anything (services, open ports, files) that are different from your baseline install of Virtual Server 2005 or any virtual machines that you build. You did establish a baseline, didn't you?