By
This article is part of our series chronicling VMware expert Mike Laverick's experience with Microsoft Hyper-V. He took a Microsoft virtualization course to broaden his horizons, and in this part on what he didn't like about Hyper-V, he talks about the initial placement feature and how it compares to VMware Distributed Resource Scheduler (DRS).
Sign in for existing members
Step 2 of 2:

As with VMware Distributed Resource Scheduler, Microsoft Hyper-V together with System Center Virtual Machine Manager (SCVMM) has an initial placement feature that selects the best host for your virtual machine (VM) when it turns on.

On the surface, Distributed Resource Scheduler and SCVMM's initial placement feature are comparable. Their execution, however, is not. Microsoft's initial placement is a one-off event. Once a VM is on a host, it stays there, even though the ability to live migrate is available. If you turned on many VMs at the same time, each one would present a placement dialog box. (In contrast, VMware DRS offers three levels of automation: fully automated, partial and manual.)

This lack of automation in Hyper-V and SCVMM comes into play when using Hyper-V's maintenance mode, which allows you to evacuate all VMs from a host to perform a physical hardware upgrade or maintenance. With Distributed Resource Scheduler in fully-automated mode, VMotion automatically restores the VMs to the original host when it comes back online and rejoins the cluster.

That is not the case with Microsoft's initial placement feature. It is up to the administrator to manually redistribute VMs in the cluster when the host comes back online. In short, Microsoft doesn't really have VMware DRS-like technology, even though the parts that would allow that to happen do exist (Live Migration and the ability to analyze performance).

Another anomaly of the initial placement feature is that its underlying algorithm is influenced by your selection of CPU type when defining a VM. In a radical departure from VMware, it is possible to set the CPU type from a pull-down list in the user interface: 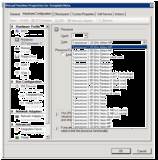 When I first saw this dialog box, my heart jumped. At last, I thought, I can tell my SQL admin he has a VM with a Nehalem processor, when in fact he's got a Pentium III processor! Sadly, the guest OS doesn't pick up on this dialog box and will still report the real physical CPU type to Windows.

Joking aside, I found it odd that the initial placement feature in Hyper-V would use such criteria. I would be worried about what to select and whether my fellow administrators would pick the wrong type. And I found it difficult to see what value it added to the process of virtualization.

About the expert
Mike Laverick (VCP) has been involved with the VMware community since 2003. Laverick is a VMware forum moderator and member of the London VMware User Group Steering Committee. Laverick is the owner and author of the virtualization website and blog RTFM Education, where he publishes free guides and utilities aimed at VMware ESX/VirtualCenter users, and has recently joined SearchVMware.com as an Editor at Large. In 2009, Laverick received the VMware vExpert award and helped found the Irish and Scottish VMware user groups. Laverick has had books published on VMware Virtual Infrastructure 3, VMware vSphere4 and VMware Site Recovery Manager.