If you have been following along with the previous articles, use your test VMs to try it yourself.

Configuring the target computers for a Pull Server

Desired State Configuration (DSC) is designed to configure more than meets the eye. While I am focusing on Windows servers, I want to point out that the targets could easily be Linux servers, Windows clients, supported switches and more. This means that a DSC target might not be a member of an Active Directory domain. The moral of the story is that we can't issue a Group Policy to tell a target which Pull Server to use and what configuration file it should pull for its local desired state.

Instead, we solve this problem by ensuring every target contains a unique client piece of software that understands DSC. In our case, that's the Windows Management Framework 4 (WMF 4). Every target has a Local Configuration Manager (LCM) that can be set to get its configuration files from a specific Pull Server.

You can check the current settings of the LCM by using the Get-DSCLocalConfigurationManagercommand. 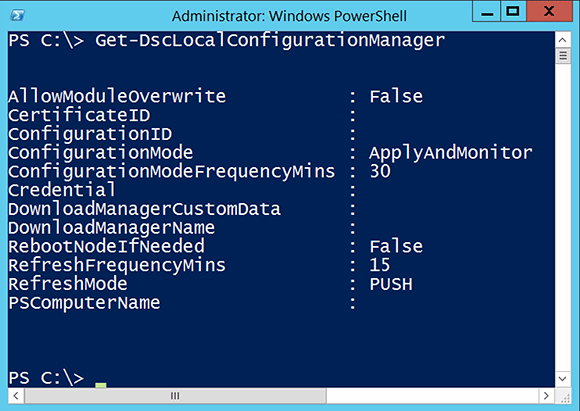 Focus on a few specific properties in the script above:

There are other important settings, but this is enough to get started.

I need to push an LCM configuration to change the properties so that the target will start pulling new configurations from a Pull Server. 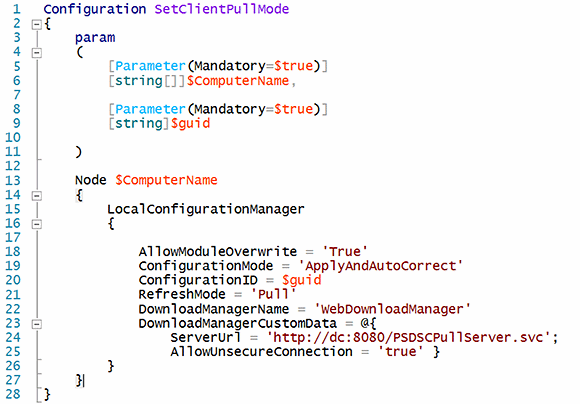 Lines 3 through 11 set up two very important mandatory parameters for the configuration to run properly. The first is $ComputerName, which specifies the target computers that should have their LCM configured by this script. The second is $guid. This will be assigned to the ConfigurationID in line 20. This defines which configuration file will be pulled from the Pull Server. The configuration Microsoft Operations Framework (MOF) file on the Pull Server must be named with the same global unique identifier (GUID) as the target. I know this sounds strange, but I will demonstrate why it is necessary.

There is a lot happening in the Node section of the script, but a few lines to highlight include the following:

To run this configuration, I have some additional lines in the script. These will fill in the mandatory parameters and configure the target LCM for the Pull Server.

After you run this script, check the Get-DSCLocalConfigurationManager on one of your target computers to verify the changes.

Creating a Desired State Configuration for the target computers

Naming and placing the configuration file

The following is a simple script that I use to rename the configuration file and put it in its correct location on the Pull Server. This script, called 4.UploadHTTPConfiguration.ps1.txt, is also available as a download.

Under the path of the Pull Server, C:\Program Files\WindowsPowerShell\DSCService\Configuration, you will notice my new configuration for the target servers.

Try it for yourself

Download a text file containing the example configuration used in this article. (3.WindowsBackup.ps1.txt)

Download a text file containing code used to rename the configuration file and put it in its correct location on the Pull Server. (4.UploadHTTPConfiguration.ps1.txt)

Notice the back tick characters at the end of the Invoke-CimMethod cmdlet. This is all one line, but I broke it up so you could read it better. This forces the target computer's LCM to perform its required configuration checks.

Within a minute, you can check the target servers and the Windows Backup software should be installed. Go ahead and try to remove the software. You won't be able to.

The first few times you try the process described in this article, it can seem very confusing, but revert your VMs and try it again.

From here, you can start building your own configurations. In the next article, I'll discuss how to work with additional DSC resources.