Live migration is one of the most widely used features in Hyper-V, and while it is relatively easy to use, you...

will first have to decide which authentication protocol you prefer.

Microsoft gives you two choices: CredSSP or Kerberos authentication. The problem is that the Hyper-V Manager doesn't give you much guidance as to which protocol is best. 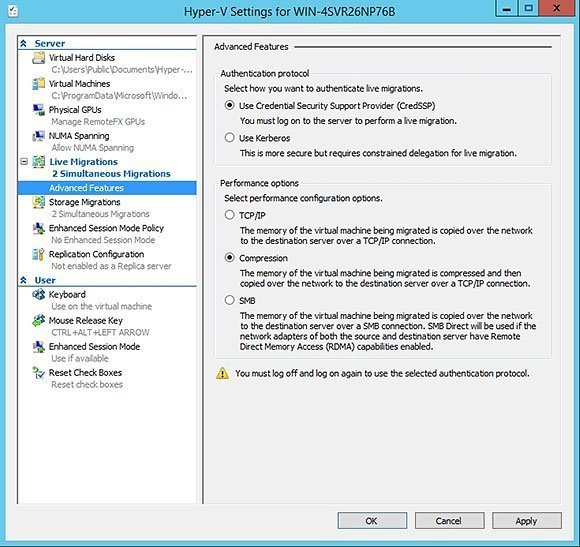 Figure A. Choose between CredSSP and Kerberos authentication.

The default option is Credential Security Support Provider (CredSSP), but the interface states that Kerberos authentication is more secure. However, Kerberos requires constrained delegation for Live Migration. So which protocol should you use?

However, CredSSP might not always be the best option. The Hyper-V Manager specifically states that Kerberos is more secure than CredSSP, but there is more to it than that. The biggest problem with using CredSSP is that the CredSSP protocol only allows credentials to be passed across a single hop. This means that if you want to perform a live migration then you will have to log in to the host server where the VM currently resides and launch the live migration from there. This might not be a big deal in small and medium-sized businesses, but it presents a major obstacle in large environments. 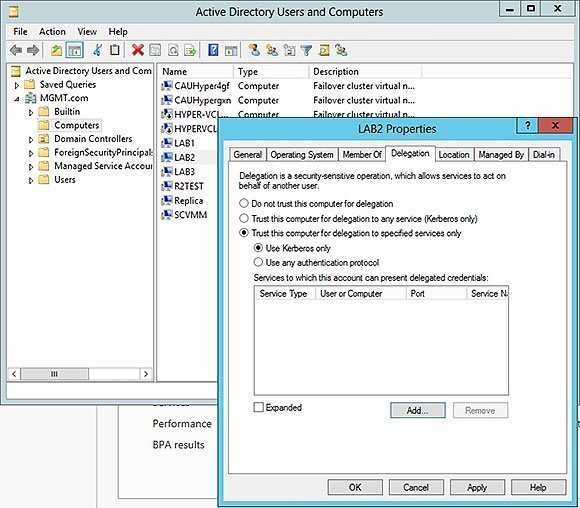 Figure B. Enable constrained delegation by selecting the Delegation tab.

When the computer's properties sheet appears, select the Delegation tab, as shown in Figure B. Select the Trust This Computer for Delegation to Specified Services Only option. Make sure that the Use Kerberos Only option is selected, and then click the Add button. 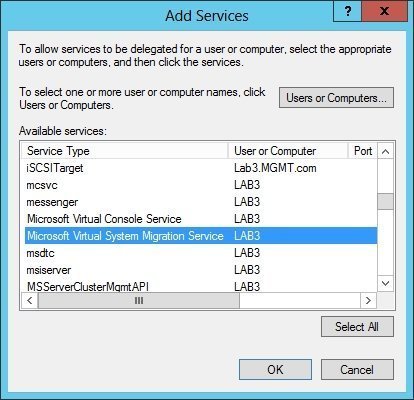 When the Add Services dialog box appears, click the Users or Computers option and then enter the name of the computer account for which you want to enable delegation. When you do, you will see the Add Services dialog box shown in Figure C. You will need to select the Microsoft Virtual System Migration Service. You will typically also need to add delegation for the Common Internet File System (CIFS) service.

As you can see, using CredSSP authentication is the easiest option, but it requires you to log in locally to the Hyper-V host running the virtual machine that you want to live migrate. Kerberos offers better flexibility, but the use of constrained delegation is essential.