While creating a virtual machine on a default configuration, it is relatively easy to add network interfaces. But if you want to modify the KVM network for specific environments, it becomes a bit harder. In this tip, you'll read how KVM networking is organized and how to set up a virtual bridge manually. 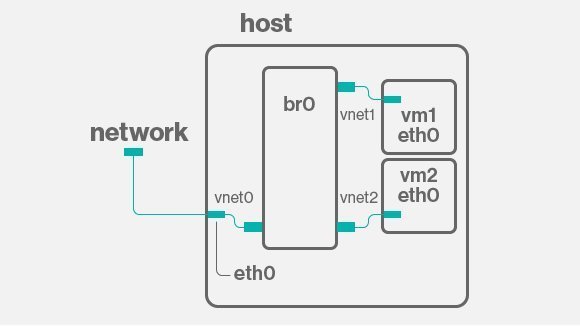 For insight into the KVM network configuration, the brctl show command can be used. This command gives the name of the bridge and the bridge ID; it will indicate whether the Spanning Tree Protocol (STP) is disabled, and it shows the interfaces connected to the bridge.

To configure the bridge device on the KVM host on SUSE or Red Hat Linux systems, you will typically create a file with the name ifcfg-br0, which contains the following:

Attaching virtual machines to the bridge

Once the host part of the configuration has been created, you can set up VM networking by using the virsh command. On the KVM host, type virsh list --all to get an overview of all VMs that are available on this host.

setlocale: No such file or directory

Next, type virsh edit hostname to open the XML configuration for the specific host in an editor. Scroll down in the device section until you find the first network interface:

To add a new interface, just add an interface section. You'll need to define the interface type (which would be bridge, the source and the model.

There is no need to define the MAC addresses of the hardware specifications, as these will be added by libvirt the first time the host is started with these new settings. After adding these changes, you can restart the VM, and within it you'll see that the new interface has automatically been added.

To manage networking in a KVM environment, there are a lot of different parts are involved. You first have to create a bridge device on the host computer, after which you can add an interface in the VM that connects to the bridge device. Once this is accomplished, you'll be able to use networking on the VM in the same way that you're used to using networking on physical machines.