A couple of months ago, I attended an IT conference where a speaker recommended that attendees virtualize all their servers. His rationale was that by virtualizing all servers, the server hardware loses its importance.

With this approach, you don't have to worry about capacity planning in the traditional sense. Rather, you can treat your server hardware as a pool of resources (memory, disk space, CPUs, etc.) that can be allocated to virtual machines (VMs) on an as-needed basis. Virtualizing servers and applications also gives you the flexibility to move a VM from one host to another in the event that a host fails or needs maintenance.

On the other hand, not all servers or applications make good virtualization candidates. So, before you take this philosophy and run with it, several issues should be considered.

Are your applications supported?
Prior to virtualizing servers, the first issue to consider is whether or not the server's operating system and applications are supported in a virtual environment. Microsoft, for example, clearly states that it will provide "limited or no technical support" for virtualized SQL Server 2000.

It's never a good idea to force a server into an unsupported state, but some unsupported configurations work perfectly fine. Windows NT Server, for instance, has not been supported in many years because of the product's age. Even so, numerous organizations use Windows NT Server to host legacy applications that are incompatible with newer OSes.

Although Windows NT isn't officially supported -- much less in a virtual environment -- Microsoft strongly hints that Windows NT will work with Hyper-V. In fact, there are even references to Windows NT within Hyper-V, as shown in Figure 1. 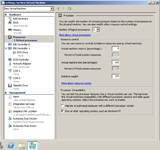 The point is that just because a configuration isn't supported doesn't mean that it won't work.

Alternatively, you may discover that high-demand servers work fine in a virtualized environment but that host servers are not capable of hosting any additional virtual servers. This doesn't mean that you shouldn't virtualize these types of servers, however, just that you won't achieve hardware consolidation. But you may still benefit from moving the virtual server to different hardware if the need arises.

Hardware support
Virtualization products tend to support only basic servers. Over the years, I have seen a few enterprise server applications that make use of USB keys or parallel port dongles as a copy protection mechanism.

Virtualization may complicate backups
When virtualizing servers and applications, you may run into a chicken-or-the-egg issue. Suppose, for example, that you decide to virtualize every server. Now imagine that you use a backup application, such as Microsoft's System Center Data Protection Manager, that backs up only domain members. This application should have no trouble backing up your VMs, but how will you back up your host servers?

If your domain controllers have been virtualized, one option may be to join host servers to a virtual domain. While this approach has been known to work, it must be implemented carefully. Otherwise, you may run into situations in which you cannot log in to your host servers or boot your virtual servers.

In my opinion, if you are going to virtualize your entire data center, it's best to leave at least two domain controllers running on physical servers to avoid this situation. As an alternative, some organizations create a separate domain or even a separate forest solely for managing host servers.

While there are certainly benefits to virtualizing servers and applications, the decision must not be made lightly. Although a full data center virtualization sounds appealing; in the real world, you will likely discover that not all your servers are good virtualization candidates.