Most admins know that server virtualization decreases hardware costs and provides high availability for virtual machines, but did you know it can also breathe new life into legacy servers?

Virtualizing ancient servers is rarely an easy process; it requires more planning and testing than the P2V conversion of newer servers. By paying attention to some critical details, however, you can get through the migration process with fewer headaches.

Why you should consider virtualizing legacy servers

How to migrate from Microsoft Virtual Server to Hyper-V

Virtualizing aging servers frees the organization from dependency on legacy hardware. Not only does server virtualization allow the application to run on modern hardware, but it also makes future hardware migrations much simpler.

Work from a backup of the legacy server

You should try to avoid involving the legacy server in the virtualization process. Legacy servers tend to be fragile, which makes it more difficult to fix problems. I recommend creating a full system backup of the aging server and working from the backup. If your server runs Windows NT, then there is a good chance that your backup software won't be able to create a full server backup. You can, however, always use the NTBackup utility included with Windows NT. Once you create a full backup, you can manually install Windows NT onto the VM and then restore the backup to it.

In some ways, the backup and restore method is less problematic than a traditional P2V conversion. Older Windows Server operating systems such as Windows NT Server and Windows 2000 Server are extremely picky about their Hardware Abstraction Layers; moving one of these operating systems to different hardware, including virtual hardware, usually results in a Blue Screen of Death. As such, it's usually better to install the operating system manually and then restore a backup. 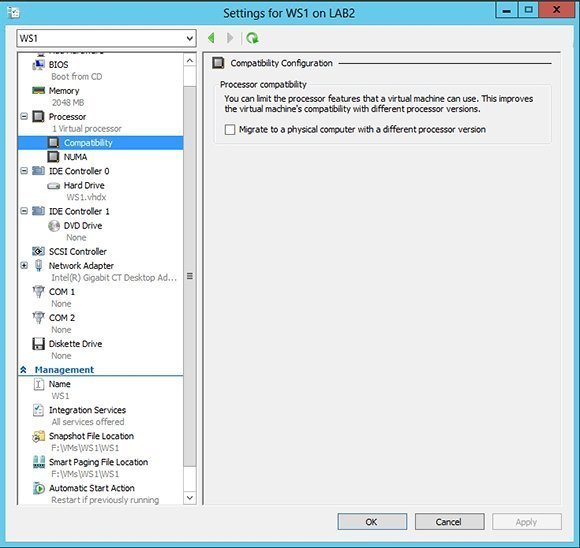 Legacy Windows Server versions were never intended to run on modern hardware; you will have to enable the hypervisor's compatibility features to work around this roadblock. For example, when you open Hyper-V's Settings page and expand the Processor container, you see an option called Compatibility. As seen in Figure A, Hyper-V implies this option is only used for certain types of P2V migrations. In reality, some older operating systems -- Windows NT Server included -- simply will not function unless you enable this option.

You should also keep in mind that Hyper-V's integration services will not work with extremely old operating systems; you will have to depend on hardware emulation instead. Emulated hardware has a reputation for being slow, but the server will probably run faster on emulated hardware than on legacy physical hardware.

Use the right device drivers

You will also have to take device drivers into account during this process. Your operating system will need device drivers for the emulated hardware. Fortunately, Hyper-V emulates very common legacy hardware, such as NE2000 network adapters, so the operating system likely already has all the drivers that it needs, provided you have the latest service pack.