Seven years have passed since VMware released ESX, and although VMware pioneered x86 server virtualization, they are no longer the only settlers headed toward the virtualized west. There are several caravans full of talented vendors creating their own brands of virtualization. To help you sort through the various offerings, this article reviews the four types of virtualization architectures currently in use on the market today and suggests what direction these models may take in the years ahead. 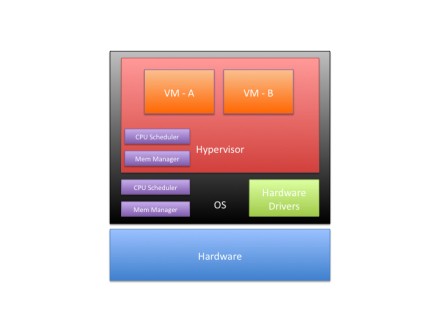 As you can see, the hosted virtualization approach relies on having an existing operating system (OS) in place. The hypervisor sits on top of the OS, and the virtual machines (VM) are managed by the hypervisor.

Hear Andrew Kutz speak at one of our virtualization seminars.

However, hosted virtualization also has its downsides. Notice that there is a memory manager and central processing unit (CPU) scheduler in both the hypervisor and the host OS. This arrangement creates a large amount of overhead. The reason this approach was taken was due to necessity since when hosted virtualization products were created prior to hardware virtualization extensions.

Hosted virtualization products are still going strong today (as evidenced by VMware Workstation 6.0), but for how long this trend continues is unknown. The fact is that the fourth type of virtualization architecture, hybrid, has the ability to offer all of the advantages of hosted virtualization without any of the overhead.

Only time will tell if companies like VMware, Microsoft, and Parallels evolve their hosted products to use a hybrid model. 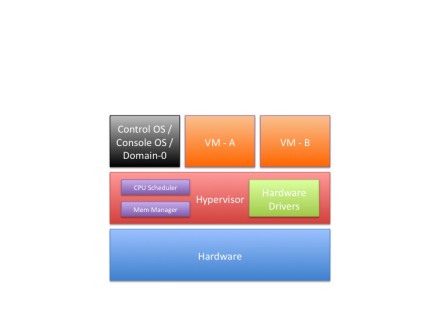 Immediately apparent about the above architecture is the lack of an existing OS; the hypervisor sits directly on top of the hardware -- hence the term "bare-metal virtualization." The reason so many data centers implement bare-metal products, such as ESX and Xen, is because of the speed it provides due to the decreased overhead from the OS that hosted virtualization uses.

Some readers may be wandering why I have categorized ESX and Xen together, after all, aren't they utilizing different architectures?

There are some downsides to using bare-metal virtualization. Typically the vendor publishes a hardware compatibility list (HCL) that dictates what hardware can be used with their virtualization product. This is because in order to keep the hypervisor as slim as possible, the number of device drivers in the hypervisor kernel is kept to a minimum. Some hypervisors have work-a-rounds to this, such as Xen and driver domains, but these are not for the faint of heart. 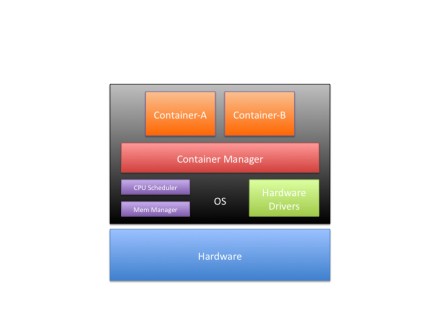 For some people the container OS requirement is too much of a no-go, but many other IT administrators see OS virtualization as the perfect architecture for implementing virtual desktops and Web servers since those platforms share many common files. However, much like the preceding two architectures, OS virtualization may soon see its proponents jumping ship to a hybrid model.

I have been deferring to this architecture for the duration of this article, and now I will explain why. 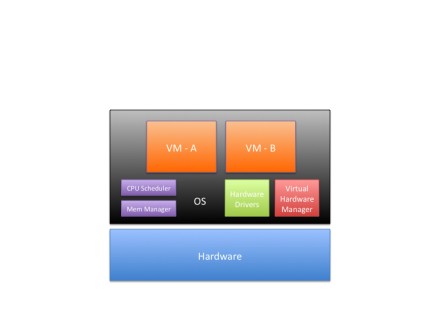 The hybrid model uses a host OS like hosted virtualization, but instead of laying a hypervisor on top of the host OS, a Kernel-level driver is inserted into the host OS kernel. This driver acts as a virtual hardware manager (VHM), coordinating hardware access between the VMs and the host OS. As you can see, the hybrid model relies on the memory manager and CPU scheduler of the existing Kernel. As with a bare-metal and containerized architecture, the absence of redundant memory managers and CPU schedulers increases the performance capabilities of this model. Yet unlike OS virtualization, the hybrid model does not have the restriction of only being to create guests with the same OS type as the host.

Hybrid virtualization offers all of the benefits of the aforementioned architectures and hardly any drawbacks, yet some negative aspects do exist. The hybrid model requires the underlying processor have virtualization extensions (such as Intel-VT and AMD-V) to function. This means that older hardware that could otherwise be utilized by other virtualization architectural models is useless to hybrid products. And while some people see the reuse of the existing kernels' memory managers and CPU schedulers as a good thing, some industry analysts assert that relying on an uncontrolled entity such as a third-party kernel is not a good thing. It puts the future of the VHM in the hands of the kernel it is loaded into, because remember, despite all assertions to the contrary, in a hybrid architecture the HVM is *not* a hypervisor. For example, many people think that KVM is a hypervisor, and this is simply not the case.

So what's in store for 2008 and server virtualization? Microsoft will acquire an OS virtualization technology in order to expand their portfolio, but internally they will likely be working on creating a hybrid model with their NT kernel. Windows 7 will likely ship with a HVM that allows the easy creation of VMs using Microsoft's yet-to-be- announced built-in VM manager. On the other hand, virtualization product vendors that do not have access to a Kernel's source code will be forced to continue to release hosted products. This will give Microsoft an edge in terms of VM performance.

Dig Deeper on Introduction to virtualization and how-tos