How an extensible virtual switch works

This extensibility can help the Hyper-V admin by allowing important applications to access the Hyper-V virtual network. This extensibility could allow applications to access the virtual network directly. Examples of such applications include network analysis, antivirus or anti-malware scanning, firewall packet filtering and bandwidth control. (For more on the architecture of the extensible virtual switch and how to create drivers, Microsoft's website has a section on Hyper-V virtual switch extension drivers.)

One unique product is 5nine Software's Security Manager, which the company claims is the first agentless security solution for Hyper-V. Their product uses the Windows 2012 Hyper-V extensible switch to provide firewalls, antivirus and anti-malware, and intrusion prevention on a Hyper-V virtual network.

The company is hoping its Security Manager will replace existing enterprise antivirus solutions used in the Hyper-V virtual infrastructure. There are several benefits to using an agentless antivirus product. Agentless antivirus scanning is much faster than agent-based scanning of VMs. In testing, 5nine Software says that its agentless antivirus incremental full scanning can be done as much as 10 to 70 times faster than agent-based products. Initial full scans, depending on amount of VMs, are 40 to 100% faster than traditional antivirus products. They claim that time savings equates to resource savings across every VM running antivirus software. The reduction in resources also means that the VM's performance and the antivirus scanning doesn't adversely affect the end user's experience. Through the agentless approach, the dreaded "AV storms" are eliminated and there is no need to maintain agents and keep antivirus signatures up-to-date across all servers. An organization could increase its VM-to-host consolidation ratio with an agentless antivirus approach, potentially saving money on server hardware.

The time savings occurs because the VM's operating system is never used. Instead it's the Hyper-V host that initiates the incremental antivirus scan of the VM's virtual disk file. This incremental scan will only need to scan the virtual disk's changed blocks since the last scan (unlike antivirus clients running inside the VM operating system that would scan all changed files). 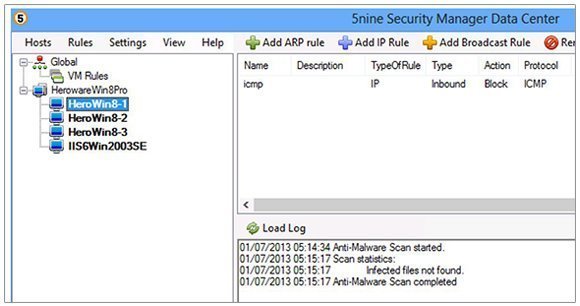 5nine Software's Security Manager shows an incremental full scan of a VM averaging between 40 seconds and three minutes, depending on changes to the VM virtual disk and memory.

You can also create firewall rules to filter inbound and outbound traffic to and from each VM. It's through this switch extension that Security Manager performs its real-time virtual network traffic filtering, monitoring and bandwidth throttling. In the image below, you can see that with the centrally controlled virtual firewall in place for Hyper-V VMs, I can create inbound and outbound rules and monitor what traffic is permitted and denied.

We've seen how Windows 2012 Hyper-V's virtual switch is now extensible, how new products are being created for it and what one product, 5nine Software's Security Manager for Hyper-V, can do. So what action items should Hyper-V admins take, considering the new capabilities the Windows 2012 Hyper-V extensible switch enables?