Some critics of Microsoft's Hyper-V say that because the hypervisor lacks features like VMware High Availability...

(HA), it's not a good fit for a virtualization strategy. Indeed, while no virtualization technology is one size fits all, Hyper-V can accommodate numerous configurations, as Microsoft's Jose Barreto notes in his blog on Hyper-V functionality .

And some aspects of Hyper-V, including the ability to use Windows clustering features and storage capabilities, may be more-than-adequate stand-ins for VMware HA. This is particularly true for small and medium-sized business (SMBs) that may not need all the features of the pricier VMware.

This tip makes the case for Hyper-V for SMBs, explores Hyper-V's clustering and storage capabilities, and walks you through a potential Hyper-V configuration.

In the case of an Exchange Server virtual machine(VM) running on Hyper-V, for example, you can configure the Exchange Server components as two VMs in a cluster for the mailbox store servers and set up two client access servers (CAS) as VMs as well. When each of these four VMs are placed on separate Hyper-V hosts, it creates the functional equivalent of hypervisor-based HA failover.

Windows clustering. By failing over a cluster to the passive node in the case of the mailbox stores or native load balancing in the case of the CAS VMs, a Hyper-V environment can achieve goals similar to hypervisor-based HA. The network architecture can help out in a big way as well. One popular example is the F5 BIG-IP series of load-balancing switches. In this way, you can "bake in" disaster recovery and high availability for applications that support the architecture. Web server VMs are perfect for this model, because several of these VMs sit behind a virtual IP address and the network technology distributes the workload to multiple VMs, this architecture enables a single VM to go offline while other systems remain available, without disrupting users for new sessions. With architecture considerations of the application and network, hypervisor HA can be overrated – making a plausible case for Hyper-V based on its current feature set. So with a clustering architecture, for example, all environments may not require hypervisor-based HA.

Storage capabilities. For a smaller virtualization environment, storage is one of the central inhibitors to implementing a good virtualization strategy. But with Hyper-V, VMs' storage is kept on a Windows file system. Users can put VMs on any file system that a Hyper-V server can access. As a result, we can build HA into the virtualization platform and storage for the virtual machines. This configuration can accommodate a host failure by making storage accessible to all Hyper-V hosts so that any host can run VMs from the same path on the shared folder resource. The back-end part of this storage can be local, storage area network, iSCSI or whatever is available to fit the implementation. Figure 1 outlines this architecture, with three Hyper-V hosts that can accommodate a host failure and a failure of the system holding the file storage resource for the VM files. 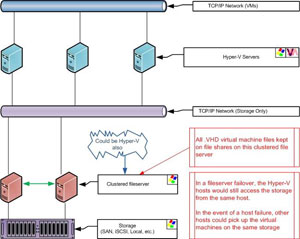 Ideally the clustered file server systems exist as a guest on a Hyper-V host, keeping the footprint more virtual. This is an example architecture and the immediate concern is scalability. Running VMs on a remote file system can create performance issues. Nor will this architecture perform as well as a Fibre Channel storage area network (SAN) that is connected directly to the host. For organizations that have a SAN and want to consider a traditional clustered configuration, Hyper-V can do so as well. With this slightly different approach, Hyper-V can provide HA across two hosts. Figure 2 shows that each host is directly connected to the same storage system, and in the event of a host failure the second host can access the VM files. 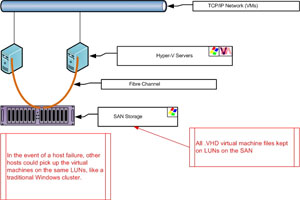 A potential Hyper-V configuration
Now that we have outlined some of the ways in which a Hyper-V environment can be configured for high availability, let's identify the pieces to make it a reality. Having a clear plan of a data center's overall equipment and software inventory is important to a successful implementation in controlling the costs for smaller environments. Table 1 illustrates the system requirements for a Hyper-V implementation based on Figure 1.

In Table 1, Active Directory is not a requirement, but it's a good idea to build into the plan – especially if this environment becomes a larger implementation. Also, this table assumes a small environment; larger environments of course will need a different approach and may add other components to the solution. Larger implementations often feature System Center Virtual Machine Manager for advanced management capabilities.

We should make a further note about the Hyper-V Manager feature, the management console that administers Hyper-V servers. If a company uses the free version of Hyper-V -- which runs on Windows Server 2008 core edition -- at least one other system may be required. For full installations of Windows Server 2008 with the Hyper-V role, users may need to install Hyper-V Manager feature.

For a Hyper-V server, device selection has to be right-sized for the workload in question. If a low-performance storage solution is used as in the example above, it may not make sense to load a host up with 128 GB of RAM or more if the planned consolidation ratio is very low. Therefore, servers with less RAM – possibly 64 GB of RAM -- can be used for smaller consolidation ratios. This makes understanding your workload critically important.

So while some critics say that Hyper-V isn't ready for complex deployments, Hyper-V is here, and it's for real. If your company is an SMB and hasn't experimented with Microsoft's hypervisor, it should. For small organizations, the benefits are pretty clear where HA and management tools that are virtualization specific are not an absolute requirement. What do you think about Hyper-V configuration options for small implementations? Write to us at editor@searchservervirtualization.com .